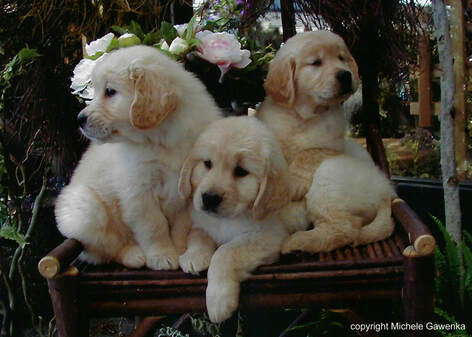 I've owned Golden Retrievers since 1980 and the constants in my life have been family, friends, and Goldens. I bred using the Sweet Grass prefix when I lived in Montana and the Medallion prefix after I moved to Seattle. Unfortunately both times, in spite of obtaining all available "clearances," I encountered other genetic problems and did not continue breeding those lines.

The Goldens I've bred/owned have obtained multiple titles including Am/Can CHAMPION, CCA, CD/CDX, CGC, JH, RI, THDN, TKP, WC/WCX, and VC/VCX; and the honorifics Outstanding Sire, High in Trial, Best in Sweepstakes, Specialty Best of Breed, and multiple Bests in Show. I train and handle my own dogs in field and performance events and occasionally the breed ring.

In 2004 I attended the Crufts dog show in England and in 2006 the Golden Retriever Club of Scotland’s 60th anniversary show. I visited Guisachan...the mystical birthplace of the breed in Scotland...both times.
​
Licensed for Golden Retrievers by AKC since 1995, I've been privileged to judge at all-breed shows, independent and regional specialties, and the 2013 GRCA National. I've also judged specialties in Canada and Indonesia.
Contact: MICHELE GAWENKA
Michele@Gawenka.net